The Congregational Memorial Hall Trust was founded in 1872 to create a memorial to those Christian ministers who were forced out of their positions in the Church of England following the Act of Uniformity in 1662. The fund established by the Trust was used to create the Congregational Library and encourage and assist Biblical studies. Since 1872 the Library has occupied a number of sites in London and is now lodged with Dr Williams’s Library in Gordon Square, London, who manage the Congregational Library collections on behalf of the Trust.

Welcome to our website. We hope you’ll find it useful, inspiring and informative. If you have any questions, please contact us. 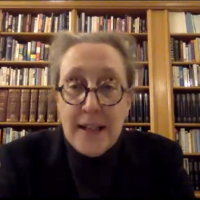 The first ever online Congregational Lecture was delivered by Professor Jane Shaw of Harris Manchester College, University of Oxford, on Thursday 28th January. The early 20th century saw a revival of interest in mysticism, and an accompanying growth of retreats and prayer groups. The lecture considered the impact of nonconformists on the revival of mysicism, […]

Dr David Wykes will retire from his position as Congregational Librarian on 25 March 2021. At a recent Library sub-committee meeting of the Trust, Revd Chris Damp, Trust and Library sub-committee Chairman, expressed the Trust’s gratitude to Dr Wykes for his guidance in helping the Congregational Library grow to its current position. Much had changed […] 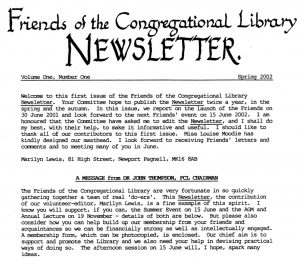 Become a Friend of the Library to receive our newsletters

Looking after your church history

Interested in looking after your Church history – see our guidance here.

More about the Reformation and Non-conformity

The way that Non-conformity grew out of the Reformation and influenced more than three hundred years of British and global history is often hidden from the national narrative.

From John Owen, born in 1616, who lived through the turbulent years of the Civil War, to the great non-conformists of the 19th century, who ministered when dissent from the Established Church was itself a bar to education and public office, and into the early 20th century, with its terrible wars and upheavals, they shaped the world in which we live now. Read more